Update on My Most Recent Jaw Reconstruction Procedure 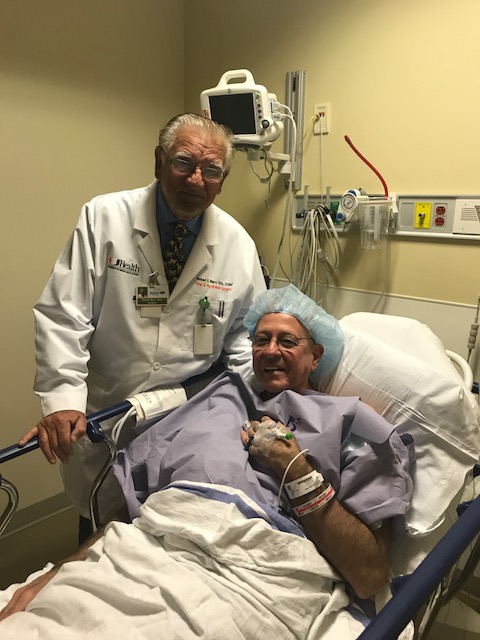 Last Thursday, August 10, I underwent the third in a series of surgeries to rebuild my right-side mandible.

Radiation treatment in 2005 eventually undermined the integrity of that bone. I suffered a pathological fracture as a result in late 2015.

Tongue cancer was painful. A broken jaw was excruciating. Worse than that, one can’t chew anything. Something had to be done.

Fortunately Dr. Robert Marks, an oral surgeon in Miami, knew just what to do for me. He is one of a kind. I’ve complained about having to travel 500 miles round trip each time I see him. But then I thank God he doesn’t operate out of Seattle.

Robojaw 1 took place in February 2016. They removed half the mandible and replaced it with a titanium plate.

After six months or so of healing, Robojaw 2 occurred the day before Thanksgiving that same year. They wired my jaw shut for three weeks to keep the bone graft to rebuild the mandible fixed in place until it was hard enough for me to safely chew again.

Another six months gone by brings things to the present with step three. Dr.  Marx removed four additional teeth in the lower front of my mouth. They would have eventually died from radiation treatment as well.

He also placed four implants below the jaw line. All this acts as a prelude to getting some teeth back in my mouth so I can chew food on that side, speak better, and prevent the upper right teeth from growing down and falling out since they have nothing to bite down on.

The surgery went well. It lasted about two hours. They were so pleased with the ease that they discharged me that very day. There was no need for an overnight stay for observation. I’m sure that made the insurance company happy.

Next Tuesday I will make yet another Miami trip for my two-week post-op check up. At that point I hope to confirm the timing for Robowjaw 4, six months from now and what it will involve.

By next February the implants should have become integrated with the bone. They will affix posts to the implants. These will set above the jaw line.

After three weeks of wearing some sort of mouth guard to keep them in place, the climax will happen. I will get eight teeth where now there are none.

I’ve already got a celebration plan mapped out. We’re sitting on a wedding gift card to Ruth’s Chris. I’ve never been. Might as well take those new teeth out for a ribeye spin and see just what they will be able to do.

Thanks for all for your prayers and support!

Ways To Pray for My Latest Jaw Journey

In about an hour from writing this post, I head for Miami. Tomorrow morning the oral surgical team at Jackson South will open me up for measures necessitated from massive radiation treatment for head and neck cancer back in 2005. Nice way to spend a Thanksgiving, eh? 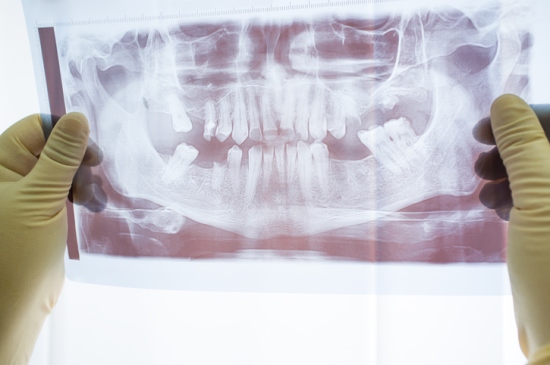 I must keep this brief as time escapes me. In most ways my prayer requests remain much the same as they were for Robojaw One. You can watch that video post here.

However, a few specifics come with this second major step in the four-part journey to return some form of normalcy to my mangled mandible.

Before listing those, here is a brief synopsis of the strategy for step two. The procedure should last about six hours. It is scheduled for 8 AM on 11/23. It involves taking bone marrow and stem cells from my hips, mixing that with a protein I can’t pronounce, along with cadaver bone from the hospital reserve (nice huh?).

They mix that into a paste and rebuild what they call the “vestibule.” I asked the doc if he could install a narthex while he was in there, but I don’t know that he got my attempt at church humor.

Now for the fun part. They wire my jaw shut for three weeks. Imagine the irony. A preacher with his jaw wired shut. One of my armor bearing brothers at OGC has taken to calling it, Operation Miami Vice-Grip. Nice.

So, here’s how you can pray and I am SO thankful that you might:

Again, thanks a ton. Hope to report on another blog post soon from the other side of Robojaw Two!

Sunday after church Nan and I will drive to Miami where we’ll stage for my surgery on Monday morning. What a terrific encouragement to have so many folks praying for me and the ordeal next week holds!

Some have asked in specific just how they can pray, so I shot the following video to share my ABCs of prayer for “Operation Robojaw:”

Question: What strategies have you used to get through major surgery, if you’ve ever had to hit the table for any length of time? You can leave a comment by clicking here.

Can’t say I don’t know how to show my bride a good time. Yes sir, I’m pulling out all the stops this year. I’m taking Nancy to the Magic City on February 14. Unfortunately we won’t be having a romantic dinner for two on South Beach, unless you count Smoothie King a five star establishment. No, we will head that way on the 14th so I can report for jaw replacement surgery first thing in the morning on the 15th. 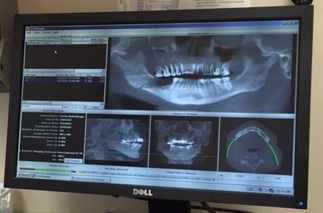 After visiting  on Monday of this week with Team Marx associated with Jackson South Community Hospital, we had no doubt the Lord had led us to just the right resource to deal with my fractured mandible. The image above shows the results of a CT scan they did in the office that day. If you look closely at the largest of the pictures head on at the top, you can see to the left (my right side) the break in the bone. Apparently there are some splinters of the jaw floating around in there adding to my misery. To use one of the doctors words after they examined the area treated with radiation in 2005–“You got fried.” And so I did and these are some of the unfortunate consequences.

The procedure takes anywhere from seven to nine hours. It begins with removing all the dead bone on that side of jaw. I will lose the next two teeth in line as well since they are sitting on top of dead bone. Fortunately the titanium plate (pictured above) then implanted will not, in my case, pass the mid-line, as in this stock picture I grabbed from the web. While the oral surgeon does his thing up above, a micro-vascular surgeon will work below on my right thigh to start something called a “free flap” transplant. When the jaw is finished, then the second surgeon will attach the vein he pulls from my leg to a good blood supply on the left side of my neck and run it across to the right side. This will insure adequate blood supply for the needed tissue growth and healing of the jaw. 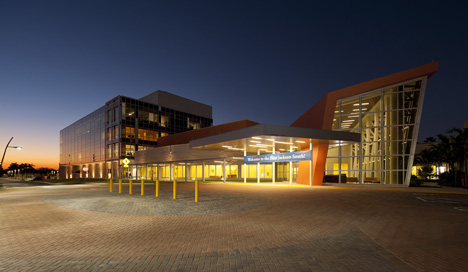 After the surgery I will spend two nights in ICU to monitor the free flap part of the process carefully. Assuming all goes well with that, then it’s off to the main floor of the hospital for another four or five days. The docs are very optimistic about how quickly I can heal and get back to work, but some of that depends on how many HBO2 dives I am likely to need after surgery to aid in the healing process. I’m still waiting for more info in that regard.

Honestly I had hoped for a sooner surgery date than February 15, but supply and demand being what it is in this highly specialized kind of procedure, I am grateful I don’t have to wait even longer.

One last tidbit. When one of the doctors who will work on the free flap procedure heard I was a pastor, he smiled and shared with me that he takes online courses at Southern Seminary in his free time! He went out of his way as a brother in Christ to give me his contact info and even friended me on  Facebook. The Lord is so kind to add those touches of providence to our circumstances when we are asking for His clear leading.

While I wait for “Operation Robojaw” to take place, I hope to make as much progress as I can on my manuscript for Baker Books. Fortunately it doesn’t hurt when I write, only when I preach! 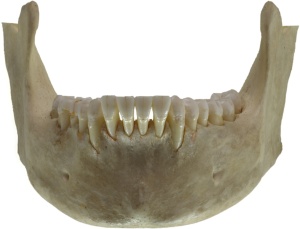 Jaw pain on my right side has plagued me since a root canal tooth failed in May. This morning I underwent oral surgery to remove dead bone on the right side of my jaw. The procedure exceeded my expectations. My surgeon cleaned out a bunch of junk. He did a superior job.  That I can work on a blog post the same day testifies to that effect.

I got to thinking about one’s jaw. I admit it. I take mine, both sides, for granted. I shouldn’t. My right side got hammered ten years ago with radiation treatment for head and neck cancer. Gotta love cancer treatment, conventional style. While cancer cells get killed, so also do healthy cells. Hey, I’m not complaining. I’m still preaching ten years later. My complications have been minimal. Couldn’t be more grateful.

Still, there is this jaw thing. Preacher’s tend to make connections from the experiential to the spiritual. Here’s mine, with the help of Puritan Matthew Henry, from Hosea 11:1-7.

He eased them of the burdens they had been long groaning under: I was to them as those that take off the yoke on their jaws, alluding to the care of the good husbandman, who is merciful to his beast, and will not tire him with hard and constant labour. Probably, in those times, the yoke on the neck of the oxen was fastened with some bridle, or headstall, over the jaws, which muzzled the mouth of the ox. Israel in Egypt were thus restrained from the enjoyments of their comforts and constrained to hard labour; but God eased them, removed their shoulder from the burden, Ps. 81:6. Note, Liberty is a great mercy, especially out of bondage (emphasis mine).

Do you see that phrase, I was to them as those that take off the yoke on their jaws? At this point in my spiritual journey, no other verse may matter more to me in the strengthening of my faith to finish strong. Do I long for the pain in my jaw to abate? Absolutely.

Would I trade that for the confidence that Jesus, by His gracious death on the cross and victorious resurrection from the dead, has TAKEN OFF THE JAW OF WORKS and given this unworthy ox the mercy of laboring under gospel grace?

Not in a million years.

Thank you, my great Savior, for using my frail jaw for reminding me once again of your great grace.

This jaw, what’s left of it, praises You.